In the world of Zentangle, Laura Harms (aka the Diva) has been hosting a weekly challenge on her blog for 200 weeks. This week marks the Bi-Zen-Tennial challenge which also inspired me to return to regular blogging here on Tangled Planet.
I've chosen one of my favorite go-to tangles, 'Phicops'--a pattern designed by Laura's husband Brad for the Diva's challenge #101 . I like this tangle for the left-right-left (or, right-left-right) motion of the strokes in each section. Laura is hoping for 200 submissions for this week's challenge. If you haven't already, please give it a try! 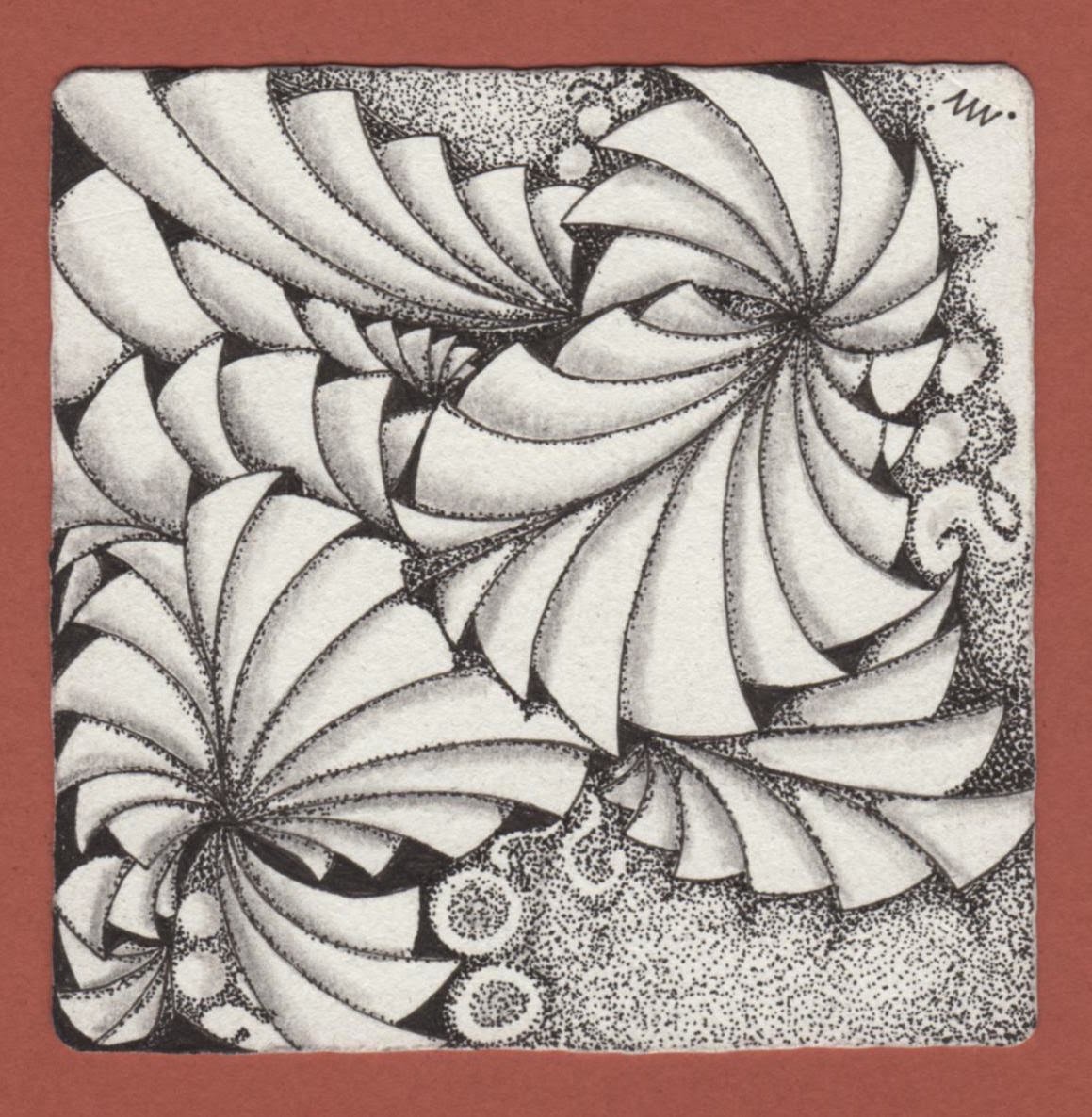 This is an update on my entry in The Sketchbook Project 2013 Summer Tour. My sketchbook, called Atlas Planetanglia: a Zentangle® Inspired Galaxy, can be viewed online here, but it is also on tour through October 17 in about 14 more cities across the U.S. See schedule here.

I chose "atlas" from a list of SBP optional themes because I liked the idea of fitting my Zentangle-inspired art into a category that I probably wouldn't have thought of myself. It took me a while to decide on a format for the 36-page sketchbook, after consulting several actual atlases on different topics. Each left-hand page illustrates the string I used in the drawing on the right-hand page. I randomly chose the tangles I would use, which are recorded in the text-box at the bottom of the right-hand page. In true atlas format, I included the names of the tangles and the colors I used (Prismacolor colored pencils). The name of each planet is based on a mashup of the names of the tangles included. Not too scientific, but a lot of fun. I hope you view my entire sketchbook in the SBP digital library.

A pattern element has been appearing in my tangles for the past few years. It may be a tangleation of the official Zentangle® pattern called Ynix which, I believe, remains unpublished. While I love drawing Ynix, usually only the seed elements of it appear in my work, perhaps because it is a shape that my hand finds very comfortable to draw. Introducing…Spangle, illustrated here with its cousin Ynix. 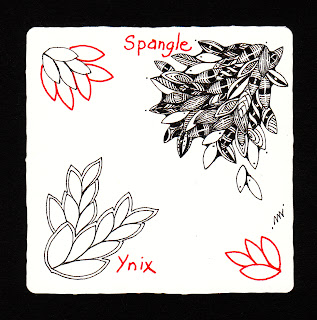 You’ll notice that Ynix starts with seed shapes in pairs surrounded by auras; Spangle has the same seed shapes which are clustered and flow randomly in many directions, most often without auras but occasionally they sneak in.

The name comes from Spangle Grass, another name for Northern Oat Grass, which has seed heads that resemble this shape in its early summer stage. 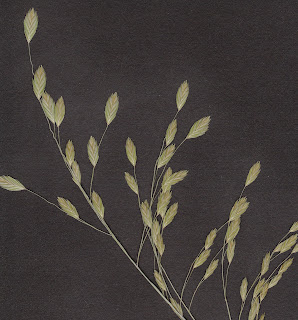 Upon closer look, I could see a woven pattern within the seed head which became the inspiration for embellishing Spangle with various patterns. Add a single dot and it looks like a school of fish; add striations and they look like almonds...and so on.

Using a blank Zendala title, I drew a  seed-shaped string with a Prismacolor pencil (limepeel) and filled it with Spangle. I then filled the individual 'spangles' with about 28 different embellishments. 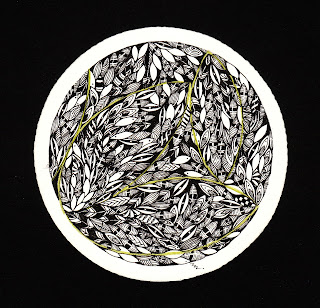 And here is the same Zendala with added colors of light aqua and pale vermilion. 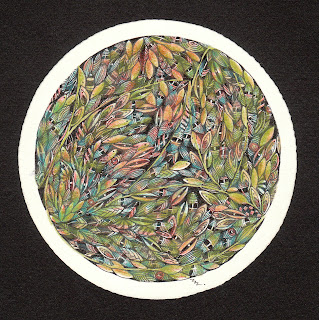 Disclaimer: If this pattern has appeared elsewhere as a tangle pattern, please let me know so that I can give full credit.
at Sunday, August 18, 2013 Labels: seed, Spangle, Ynix, Zendala
6 comments

My previous post here showed nine tiles I completed for a tangled ensemble swap which was held last weekend at Tangle U, the first annual continuing education conference of its kind for Certified Zentangle Teachers. Each participant in the swap kept their own center tile, and then received eight other tiles to complete a unique grouping. 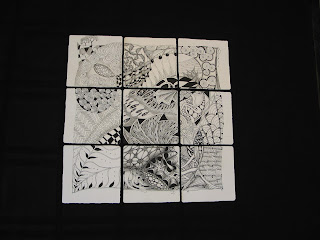 Beginning in the upper left corner and continuing clockwise, my eight other tiles were created by: Marie Browning, Jane MacKugler, Mary Beth Schoonover, Darla Williamson, Ann Coakley and Sadelle Wiltshire, Sandra Chatelaine, Debra Castaldi and Janet Nordfors. Thank you all! And special thanks to Barb Gill for organizing the swap and spending many hours last weekend compiling them all.
at Sunday, March 31, 2013 Labels: ensemble, Tangle U
0 comments

I've been working on a 9-tile ensemble for a swap that I am participating in with 8 other CZTs (Certified Zentangle Teachers) at an upcoming gathering next week. We are all using the "curvy" pre-strung set created by Zentangle.com and will swap one of our tiles with each of the other participants, keeping our own center tile. Here is my finished set. 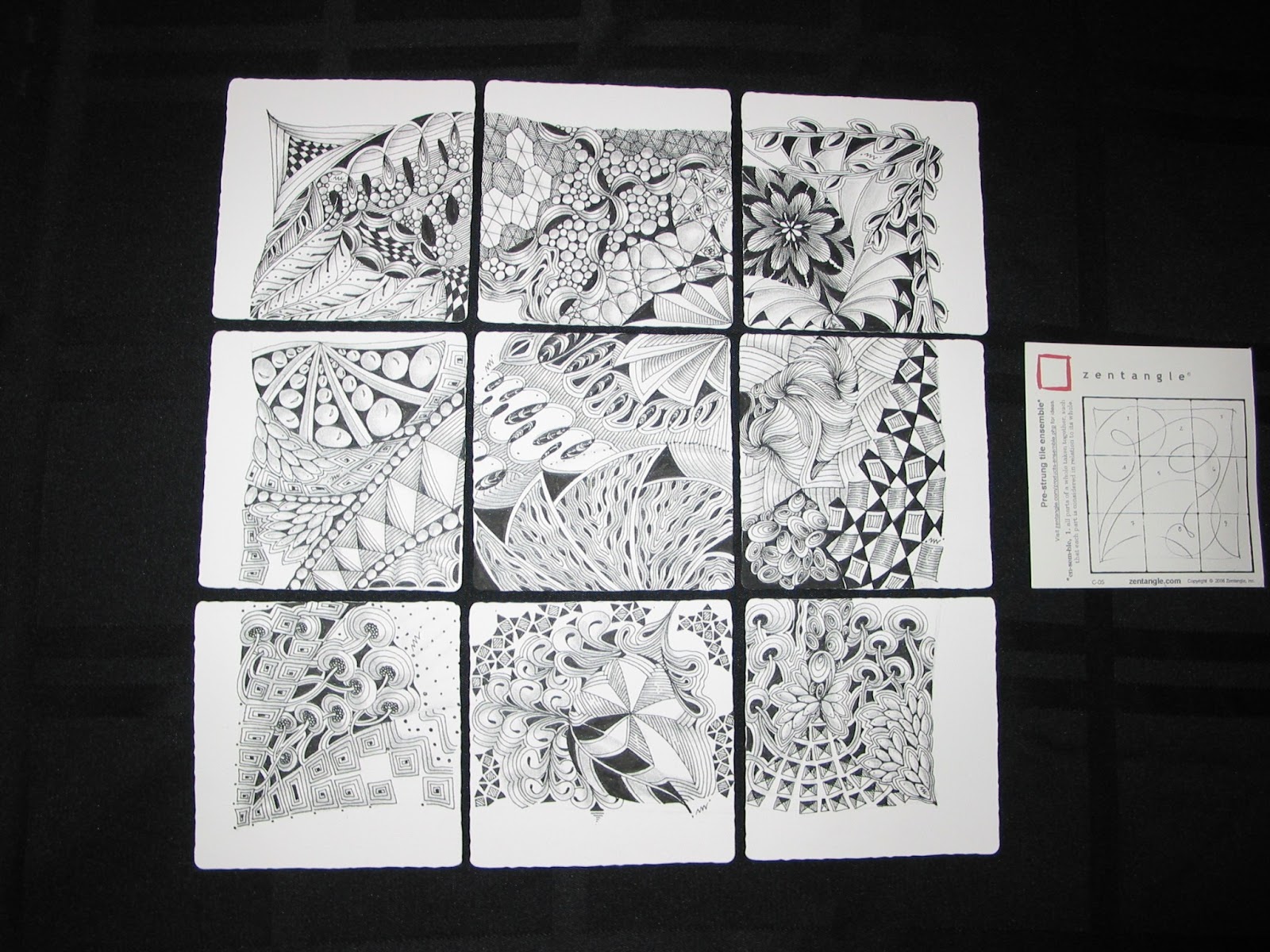 Email ThisBlogThis!Share to TwitterShare to FacebookShare to Pinterest
Older Posts Home
Subscribe to: Posts (Atom)
Welcome to my Zentangle inspired world. From the moment I discovered the drawing technique called Zentangle®, I embraced it as an art form, a creative jumpstart, and a technique for slowing down and focusing in a relaxed, meditative way.
Contact me